No rides in Kinsmen Park this year. After closing the rides at the end of last season, the City began construction of new attractions that are scheduled to be open in 2014. 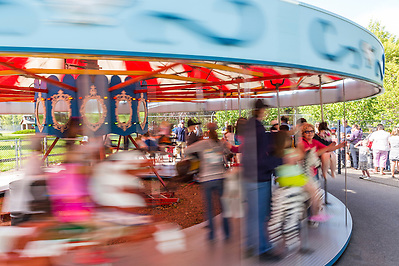 City of Saskatoon offers free rides on the last day of operation of the Kinsmen Park train and carousel, Labour Day, Monday, September 3, 2012.

I’m sure there must be three or more generations of families in Saskatoon who have fond memories of visiting Kinsmen Park to ride the train, carousel and Ferris wheel.

I was at the park last September, along with thousands of others, to witness the end of an era as the City offered rides for free on their last day of operation.

Looking forward to seeing the new Kinsmen Park in 2014. It’s supposed to contain a water feature, climbing area and maybe even a zipline. And, of course, there will be a train. What child doesn’t like trains?

« Summer nights at the beach
Summer’s gotta be near »

Darrell Noakes is an accomplished, award-winning writer and photographer based in Saskatoon, Saskatchewan. Darrell’s stories have appeared in travel and feature magazines, as well as local, national and international news media.

Things are coming along
We're updating the site. Watch for changes.